«Kids can be the best teachers»

Chrisovalantou Rountou from Florina in Nothern Greece moved to Germany for a year to spent her European voluntary service (ESC) in a Kindergarten. In Hagen, a small city in North Rhine-Westphalia she felt home soon – not only because of the cities’ historical connection to Greece, but also because of the children and her co-workers in the German-Greek Kita „Elaphi“. 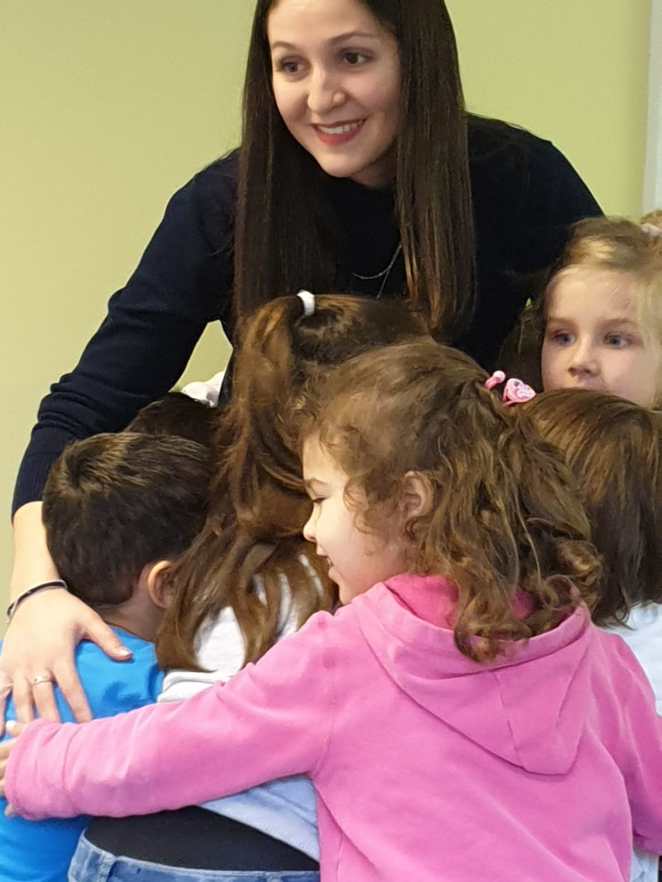 The day when I left Greece I felt alone and at the same time excited – it was like everything happened by mistake, so it got even more exciting. Why? In July 2018 I just had graduated from the Department of early childhood education. Having no idea for the next step I saw a Facebook post about volunteering in Hagen. As being always interested in Germany I did some research. They were asking for a volunteer to work in a Greek-German Kindergarten. 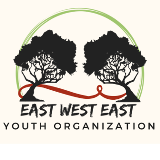 So I sent my application. After almost two months without response I thought that they had already found an appropriate young person. But then a member of the Organisation East West East e.V. called me and asked if I still was interested. After some discussions and an interview, we agreed that I could make it. We stayed in touch in order to help me preparing for this experience.

On January 20th 2019 I took my flight to Germany. One of my mentors was waiting for me. As it was my third time in Germany, the feelings weren’t too strange, but my first day was exhausting as we had to manage some issues about the house, paper works and my new phone number. In the evening I was invited for dinner with the members of the organisation.

Greek influences in Hagen
My mentors were really helpful as they accompanied me to any office. So my first contact with the locals was really pleasant – and every time I heard Greek on the streets in Hagen, it felt really nice. It was a surprising experience to me, that in a small city such as Hagen there were many Greek restaurants and takeaways.

Later I met my new collegues and I got to know the Kindergarten, where I would work for a year. My first visit and impressions were very pleasant. It is a really nice Kindergarten, friendly to the environment with comfort and a big, beautiful playground. Walking around the groups and meeting the kids I felt very welcomed to the place, so that I was looking forward to start working there.

Of course in the beginning it was difficult to remember so many new names, especially when they’re foreign. I didnt really know a lot about communicating with the German kids in the beginning. Thanks to the older children we found a way to interact and I liked that we were learning from each other. That the kids were so supportive made me trying more and more – sometimes kids can be the best teachers. 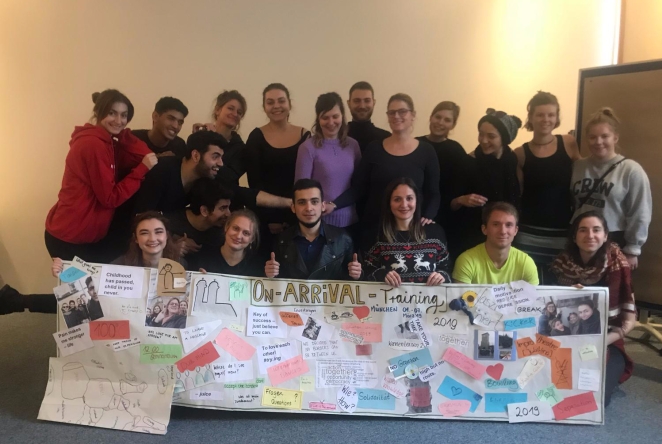 Understanding how Kindergarten in Germany works
It took me few weeks till I understood the way how Kindergarten in Germany works and how the teachers interact with the kids. Every day was a new lesson for me. As well, the weather didn’t really help at the beginning to be more active as it was cold and snowing. But this was a chance to spend more time with my housemates and meet them. We also had time to make our house fit to our preferations.

For many people a Greek in Germany isn’t something really surprising – the other way around often it is something special. Something I still remember is when I met a Greek old woman in a bus in Hagen and I told her that I came alone to Germany she couldn’t believe it. She continued asking from whom I was hosted, because it was strange to her.

Getting used to the life in Germany
As the time passed I started to feel more confident when I was with the kids and we could do more things together: We started with some short activities in the atelier and later we were doing mobility activities with music. Then we continued with activities in the gym and when the weather was good we were playing outside. Sometimes also I was doing the morning round. We also did some educational trips in a zoo and some parks.

The aim of the school was to let the children play what they like and not what the teacher decided. They wanted them to have their own opinion and feel confident – by always following the rules and respecting the others. Except the activities I also had to support the team, for example during breakfast and lunch time to distribute food and keep the kids quiet. When I was in the group with the babies I supported by changing pampers. I was asked also to help organising small fests and of course the summer fest before the year was over. 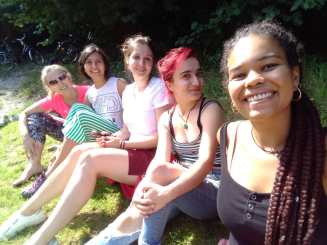 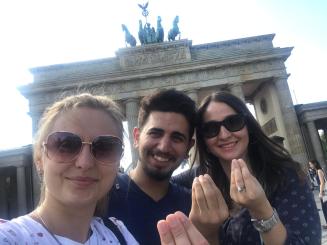 What stays
After this year I felt really excited about the job and the Kindergarten – their way made me love it. It is important for me when you succed to bring all the kids around you by carrying out activities that are based an their interests. For me, the biggest asset was that I had the support from my collegues, the kids and their parents: it made me be more active and try more and more. And of course my mentors who were there to help in any difficult case were important to me.

As well I supported East West East with some actions and I met all the other volunteers who run the organisation. I also took part in some projects. By this I had the chance to experience new challenges, meet people and interact on topics with current importance. In my free time I decided to travel to see new and beautiful places. There I met people who became really good friends. As well in Hagen I met people, most of them Greek, with whom I had the chance to compare the life in Germany to Greece! It was a sad thing hearing and talking about all the young people who are leaving Greece to find a better job in a new place.

Something funny that really impressed me in Germany was the accuracy in public transport: I could plan my trips with exact times! As the pandemic started close to the end of my voluntary service I had to cancel some of my plans, but for sure living and working abroad in a job I studied made me grow up and see things from another point of view. I had to take care of myself and be responsible, so I got more confident and strong.

For me it is an experience everyone should live once in a lifetime. Looking back, I am proud and happy that I made it. In my opinion by working voluntarily you can better understand the needs of a job. I am sure, I will always remember this year as one of the best in my life – and of course the little kids as the first students I had. 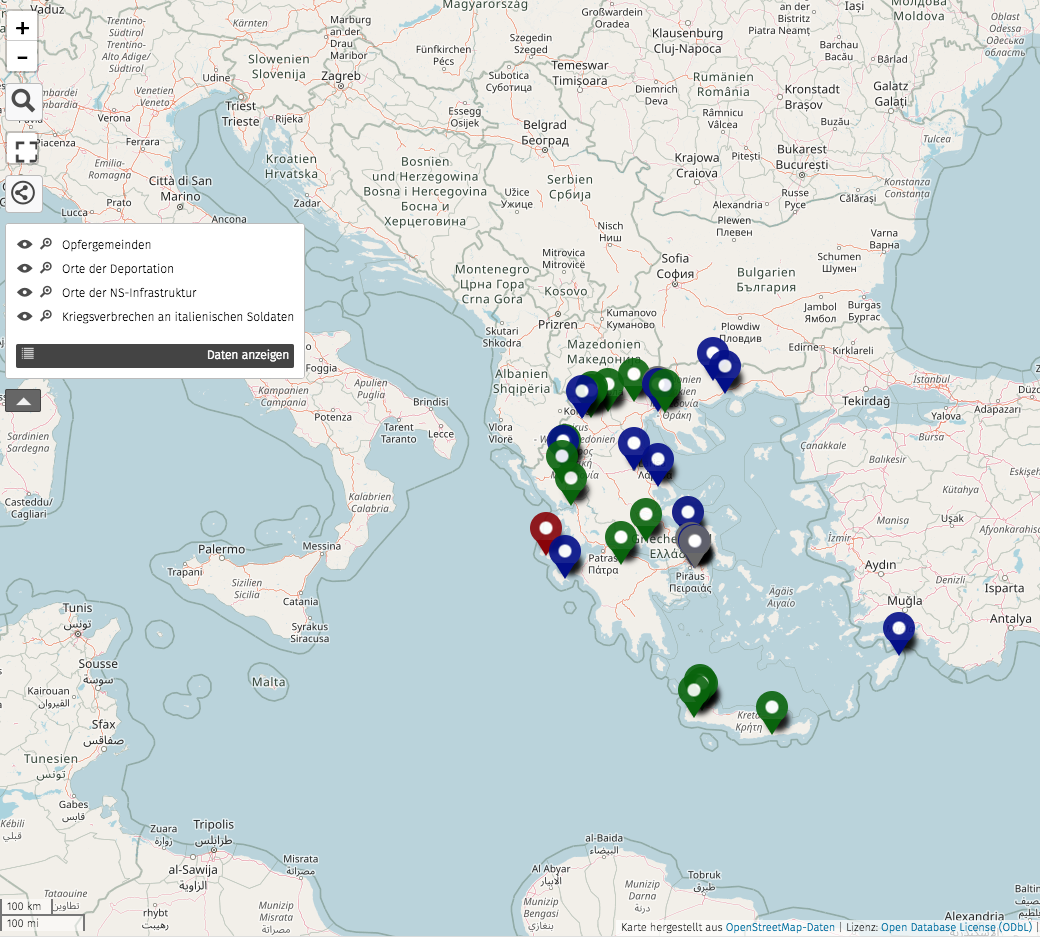 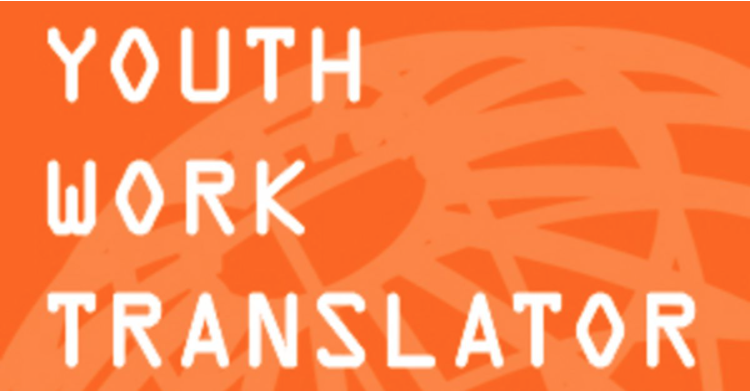